Hey, all. One quick note.

I’ve been getting an obscene number of spam-comments from some sort of spamtastic spambot in the last couple of weeks (anywhere between 15 and 25 per day). I think this is due to the lack of a security measure with my old blog editor, so I’ve switched to blogger, but keeping things hosted on my own server. I’ll be migrating posts from the old editor into the new as time allows.

The new URL is simply www.todddowns.com 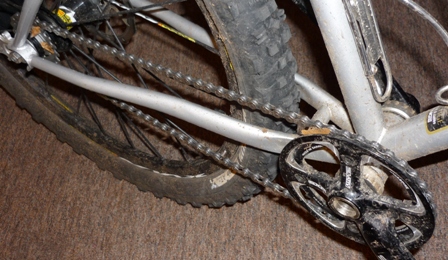 I’m trying to answer that question for myself, and I’m not entirely sure I will like the answer - not one bit.

I went for a ride with a group of friends today in Harold Parker State Forest, one of my favorite places to ride, for a sum total of about three hours. I’m sore in all the ways I should be, including one that I’m especially not psyched about. My right knee is really bothering me.

As a cyclist, I’m no stranger to knee pain. It’s always been just one of those things that I expect to come along with the sport - what with all the crashing involved in BMX and mountainbiking. I’ve ridden my share of over-geared [sweet] fixies and ridden in the cold in shorts, and everything else one should avoid if long-term knee health is something of even a passing interest. It’s been something I’ve brushed off over and over, but after today, the pain is just too much. Now, I’m afraid it’s time to make a decision. Is one just not enough, anymore?

I enjoy riding singlespeed. I enjoy it for all the reasons you’ve heard. I’m not afraid to tell you that I like it for the way people look at my bike or for the nods-of-approval from other singlespeeders or for the occasional, “Dude, you did that on a singlespeed?!” Beyond all of that, though, I like singlespeed as an equipment choice. As a professional mechanic, when time rolls around that I can spend some quality time with my own bike, I like it to be with wheels-on-the-ground, as opposed to seatpost-clamped-in-a-repair-stand. My single-geared, rigid bike with cable-actauted disc brakes doesn’t require a lot of maintenance and that’s just the way I like it. This is how my pre-ride ritual goes:

4) Bounce the bike (if it sounds like a basketball, it’s good - I can tell you more about that, later)

I don’t have to worry about checking sag or when was the last time the brakes were bled or did I smack a derailleur on the last ride. I just get on the damned bike and go. Great, yes? No.

My devotion to simple thrills is wreaking havoc on my joints. My wrists and elbows seem to deal with the rigidity portion of the equation just fine, but my knees can’t hack the harshness of their workload anymore. I’d gear down, but then I’d be working harder and spinning faster on the flat bits and the downish bits. Plus I begin to wonder whether gearing down and letting myself spin more on the climbs would limit my ability to bump and float over rocks and roots, bringing suspension back into the picture, but that’s just getting ahead of myself. The root point of it all is I don’t want to be forced into ending my ability to ride, altogether, by being a bullheaded stalwart.

Much as I love it, I think time may have come to let go of my beloved SOMA and give derailleurs a go.

My last day at the Tour was a bittersweet one, for sure. We were finished with the , so this last day would be a flat stage running parallel to the Mediterranean coast. We arrived at the village, per usual, and relaxed with coffee and pastry under our tent. Lionel was in a particularly giddy mood and was really hamming it up. We would have a French TV reporter as our VIP in Car 3, and Lionel was either excited, or nervous, or likely a bit of both.

Niki Terpstra and Florent Brard attacked inside the first kilometer to get their day in the sun. As Car 3 for the day, and with a single, early break that quickly grew to about 10 minutes we found ourselves in a fairly relaxed position where Lionel could go about filling-in the reporter in on all the ins and outs of neutral service and on the History of MAVIC, including a stop on the roadside to get some footage of the car and all its rooftop kit. For our race leaders, a day in the sun, which was literally just that, turned out to be their ultimate undoing as they each succumbed to the heat, with Terpstra finally getting swallowed up by the group with 10k to go. After a handful of late attacks, the day ended in an inevitable bunch sprint and with the Manx phenom, Cavendish taking his fourth stage win.

On this day, though, I had become much more interested in taking in as much of the French countryside as I could manage. It had been a fantastic trip to this point and I was disappointed to think I would be boarding the TGV the next morning to make my departure. I had made fast friends with my French Service Courses counterparts and was finally getting the hang of reading a menu and not making a complete fool of myself when trying to order dinner.

On arrival at our hotel in , I met up with Petar, who would be taking my place in the car for the next week through the . Pete was still a bit jet lagged and sleeping when I got to the room, but immediately snapped up, grilling me for every detail of my trip and frequently interrupting my responses with, “DUDE! We’re in !” It was almost more than either one of us could handle, on our own - put both of us in the same room, and we became downright adolescent. Before long (like, within minutes) we were both speaking a mad gibberish, each statement punctuated with, “DUDE! We’re in !” or, “DUDE! We’re at the TOUR!”

I was mid-sentence explaining to Pete how outrageous the dinners had been all week when there was a knock at the door. It was Denis, gently reminding us, “Il est vingt heures moins le quart! Allez! Dinner! Let’s go!” That’s 7:45… we were supposed to meet at 7:30. We got our shit together quick and started walking to the cars, assuming we were driving to dinner. Wrong again, Denis alerted us, “No. Walking,” motioning toward the road.

Pete turned to me, pointing out that he had been asleep for most of the drive to the hotel, but didn’t recall anything that resembled a restaurant on the way to our hotel on the outskirts of . I didn’t notice anything either. The hotel was about half a kilometer down a lonely road from a traffic circle with an Esso station and nothing else as far as I could see. I quipped, “It’s been a long week, maybe we’re just going to the gas station for Slurpees and HoHos and calling it a night.” We continued to march down the road toward the circle, bantering on about the trip and the absurdity of it all. “DUDE! We’re in !”

At the circle, we found ourselves walking straight into the Esso’s lot, at which point I nudged Pete and muttered, half amused and half bewildered, ”Dude. We ARE eating at a fucking gas station.”

We marched past the front of the station that was a very nondescript, very Mediterranean, stucco building with a tile roof, and around the side where a small window and door could be found. Through the window, a bar with about six stools could be seen, and once in the door we found a small dining room of about ten tables, six of which were put together for our group. Georgie, the Swiss, got up from the table, walked over to us, and firmly stated, “We meet for dinner at seven-thirty, not eight o’clock. It’s hard enough getting the fucking French to keep to a schedule. If they had their way, we’d be here all fucking night!” His words trailed off into a giggle, so we knew he wasn’t genuinely upset. Even the French, among us, found it funny. Funny ’cause it’s true.

Dinner became more surreal as the aperetifs arrived along with the menus - a four-course dinner at an Esso station. Four bottles of table wine to start, salads with fresh, local goat cheese, roast duck, a cheese course, coffee, and a sweet, soupy yogurt concoction for dessert that was just amazing. It’s a dinner story I’ve told a hundred times since I’ve come home, and there’s no end in sight. I couldn’t have dreamt up a more perfectly over-the-top way to cap-off my first trip to the Tour.